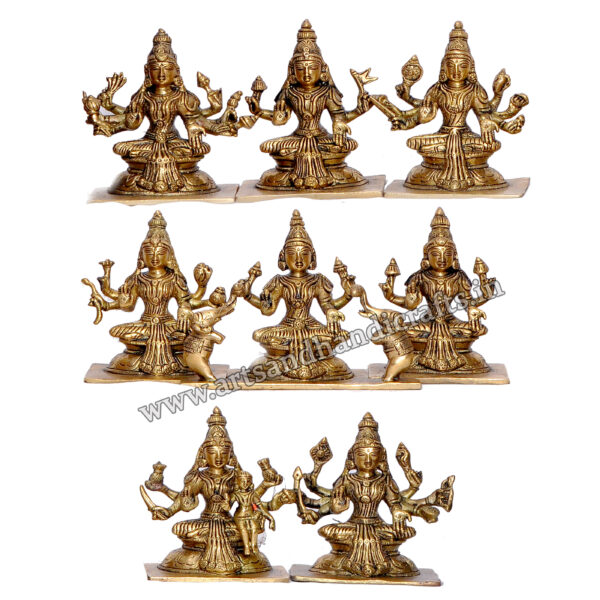 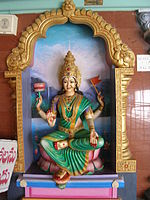 She is depicted as four-armed, carrying a lotus and a white flag, other two arms in Abhaya mudra and varada mudra. ‘Adi’ means source.Adi Laxmi is the divine principle as wealth that supports a seeker to reach at their source i.e.’atman’ or consciousness.If one individual posseeses AdiLaxmi, they can effortlessly delve deep into dhyana and realize the state of absolute silence, bliss and peace. Without Adi Lakshmi a seeker fails to quieten their wavering and chattering mind .Out of all Ashta Lakshmis this particular aspect is responsible for furthering of spiritual wealth. 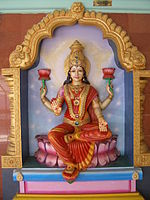 Dhana Lakshmi (“Money Lakshmi”), is the goddess of wealth.[3]

Goddess Dhana Lakshmi is Four-armed, in red garments, carries Sudarshana Chakra, Shankha, Kalasha (water pitcher with mango leaves and a coconut on it) or Amrita Kalasha (a pitcher containing Amrita – elixir of life), bow-arrow, a Lotus(flower) and an arm in abhaya mudra with gold coins falling from it. 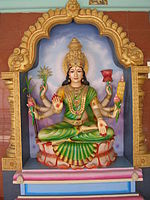 Dhanya Lakshmi (“Grain Lakshmi”) is the goddess of agricultural wealth.[3]

She is depicted as eight-armed, in green garments, carrying two lotuses, gada (mace), paddy crop, sugarcane, bananas, and her two hands in abhaya mudra and varada mudra.Dhanya Laxmi is also the principle of wealth that provides the ability to consume or to indulge.If a person possesses Dhanya Laxmi, they will have the fortune to enjoy the worldly pleasures. 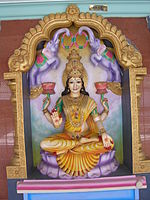 Gaja Lakshmi or the giver of power of royalty, as interpreted by Swami Chidananda.[4]

According to Hindu mythology, Gaja Lakshmi brought back the wealth lost by Indra (king of demi-gods) from the ocean.[2] Vasudha Narayanan interpreted the name as “one who is worshipped by elephants”.[1] 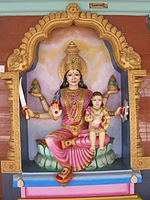 Santana Lakshmi (“Progeny Lakshmi”) is the goddess of bestowing offspring.[3]

She is depicted as six-armed, carrying two kalashas (water pitcher with mango leaves and a coconut on it), sword, shield, a child on her lap, a hand in abhaya mudra and the other holding the child. Her sword and shield symbolises a mother’s ability to even kill someone to save her own child . The child holds a lotus. 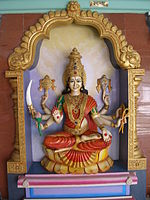 Veera Lakshmi (“Valourous Lakshmi”) or Dhairya Lakshmi (“Courage Lakshmi”) is the goddess who bestows valour during battles[3] and courage plus strength for overcoming difficulties in life.[2] 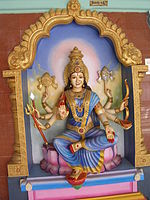 Vijaya Lakshmi or Jaya Lakshmi (“Victorious Lakshmi”) is the goddess and the giver of victory,[4] not only in battles[3] but also for conquering hurdles in order to achieve success.[2] 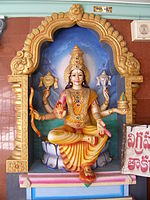 Vidya Lakshmi (“Knowledge Lakshmi”) is the goddess and the bestower of knowledge of arts and sciences. . She holds a book of vedas, a peacock feather as a pen, vard mudra and abhay mudra.[4]

[5] In addition to emergence of Ashta Lakshmi temples since the 1970s, traditional silver articles used in home worship as well as decorative jars (‘Kumbha’) now appear with the Ashta Lakshmi group molded on their sides.