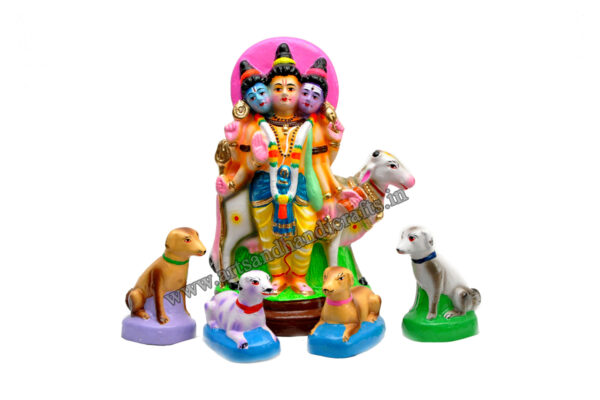 Dattatreya (IAST: Dattātreya, Sanskrit: दत्तात्रेय) or Dattā is a paradigmatic Sannyasi (monk) and one of the lords of Yoga in Hinduism.[1]In many regions of India and Nepal, he is considered a deity. In Maharashtra and Karnataka, he is a syncretic deity, considered to be an avatar (incarnation) of the three Hindu gods Brahma, Vishnu, and Shiva, collectively known as Trimurti.[2] In other regions, and some versions of texts such as the Garuda Purana, Brahma Purana and Sattvata Samhita, he is an avatar of Vishnu.[3]

His iconography varies regionally. In western Maharashtra, for example, he is typically shown with three heads and six hands, one head each for Brahma, Vishnu and Shiva, and one pair of hand holding the symbolic items associated with each of these gods: rosary and water pot of Brahma, conch and wheel of Visnu, trident and drum of Shiva.[2] He is typically dressed as a simple monk or almost naked, situated in a forest or wilderness suggestive of his renunciation of worldly goods and pursuit of a meditative yogi lifestyle. In paintings and some large carvings, he is surrounded by four dogs and a cow, which is a symbolism for the four Vedas and mother earth that nourishes all living beings.[2][4] In the temples of southern Maharashtra, Varanasi and in the Himalayas, his iconography shows him with one head and two hands with four dogs and a cow.[5]

According to Rigopoulos, in the Nath tradition of Shaivism, Dattatreya is revered as the Adi-Guru (First Teacher) of the Adinath Sampradaya of the Nathas, the first “Lord of Yoga” with mastery of Tantra (techniques).[6][7] His pursuit of simple life, kindness to all, sharing of his knowledge and the meaning of life during his travels is reverentially mentioned in the poems by Tukaram, a saint-poet of the Bhakti movement.[2] Over time, Dattatreya has inspired many monastic movements in Shaivism, Vaishnavism and Shaktism, particularly in the Deccan region of India, south India, Gujarat, Rajasthan and Himalayan regions where Shiva tradition has been strong.[8] According to Mallinson, Dattatreya is not the traditional guru of the Nath sampradaya, he was coopted by the Nath tradition in about the 18th century as a guru, as a part of Vishnu-Shiva syncretism. This is evidenced by the Marathi text Navanathabhaktisara, states Mallinson, wherein there is syncretic fusion of the Nath Sampradaya with the Mahanubhav sect by identifying nine Naths with nine Narayanas.[9]

Several Upanishads are dedicated to him, as are texts of the Advaita Vedanta–Yoga tradition in Hinduism.[10] One of the most important texts of Advaita Vedanta, namely Avadhuta Gita (literally, “song of the free”) is attributed to Dattatreya.[11][12] Annual festival in the Hindu calendar month of Mārgaśīrṣa (November/December) reveres Dattatreya and this is called Datta Jayanti.[13]