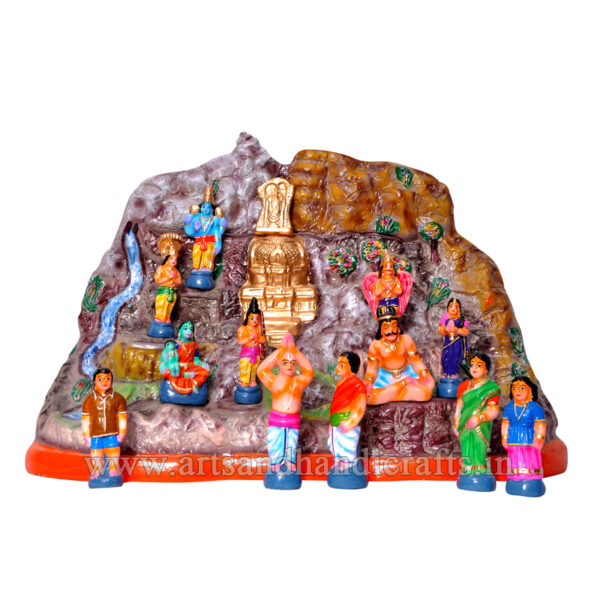 During Dvapara Yuga, Adisesha resided on earth as Seshachalam Hills after losing a contest with Vayu. According to Puranas, Tirumala is regarded as Adivaraha Kshetra. After killing Hiranyaksha, Adivaraha resided on this hill. Sri Venkatachala Mahatyam is the widely accepted legend over Tirumala Temple.[8]

During Kali Yuga, Narada advised Rishis who were performing Yajna to decide who could be given the fruits of yagna among Trimurtis. Bhrigu was sent to test Trimurtis. The sage who had an extra eye in the sole of his foot visited Lord Brahma and Lord Shiva and went unnoticed in both these locations. At last he visited Vishnu and the lord acts as if he had not noticed Bhrigu. Getting angered by this act, sage Bhrigu kicked Lord Vishnu in the chest, to which Vishnu did not react and instead apologized to the Sage by massaging his feet. During this act, he squashed the extra eye that was present in the sole of Bhrigu’s foot. However Lakshmi finds it as an insult and had left Vaikuntam onto Earth to Kolhapur and started meditating.[8]

Lord Vishnu bore human form as Srinivasa, left Vaikuntam, in search of Lakshmi, reached Tirumala Hills and started meditating. Lakshmi came to know about the condition of Srinivasa and prayed to Siva and Brahma. Siva and Brahma then converted themselves into Cow and Calf and Goddess Lakshmi had handed over the cow and calf to Chola king ruling over Tirumala Hills at that time. The Cow would provide milk to Srinivasa daily while it was taken for grazing. One day Cowherd saw this and tried to beat the Cow with staff but Lord Srinivasa had borne the injury. Getting angered by this Srinivasa had cursed the Chola king to become a Demon as dharma says Servants sin should be borne by Kings. The king prayed for mercy after which Srinivasa said to him, that the King should take next birth as Akasaraja and should perform marriage of his daughter Padmavati with Srinivasa.[8]

Lord Srinivasa went to his mother Vakula Devi on Tirumala hills and stayed there for a while. After curse Chola king took rebirth as Akasaraja and he had a daughter named Padmavati who was born in the Padmapushkarini situated at present day Tiruchanur in Andhra Pradesh. Lord Srinivasa married Padmavati at present day Narayanavanam in Andhra Pradesh and will return to Tirumala Hills. After few months Goddess Lakshmi had come to know about the marriage of Srinivasa with Padamavati and went to Tirumala hills to question Srinivasa. It is said that the Lord srinivasa turns into Stone right when he was encountered by Lakshmi and Padmavathi. Lord Brahma and Shiva appear before the confused queens and explain the main purpose behind all this – The Lord’s desire to be on the 7 hills for the emancipation of mankind from the perpetual troubles of Kali Yuga. Goddesses Lakshmi and Padmavathi also turn into stone deities expressing their wish to be with their Lord always. Lakshmi stays with Him on His Chest on the left side while Padmavathi rests on His Chest’s right side.[8]