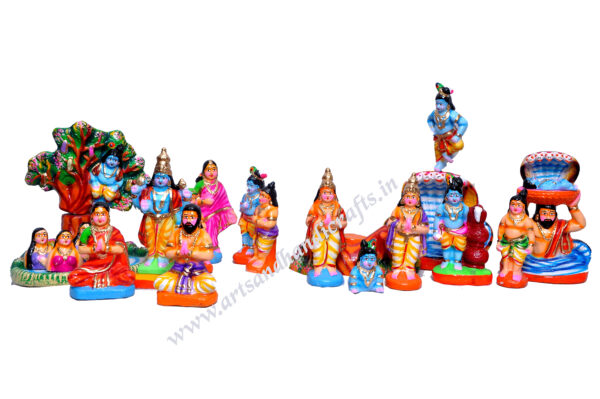 Janmashtami is a festival much looked forward to by Hindus. It is the birthday of Lord Krishna, one of the most loved Hindu gods, whose life continues to be a source of inspiration, solace and happiness to millions…he is believed to be an avatar or incarnation of Maha Vishnu, the Supreme God… Although river Yamuna was in spate, Vasudev’s journey was made easy by divine occurences, like a hooded serpent providing a shield from the pouring rain and the river parting to create a smooth path for Vasudev to cross the river on foot.

Yashoda and her village folk are delighted to see baby Krishna, who appears to be the most beautiful baby one has set their eyes upon. He has a radiance and aura emanating from him. He seems to have brought joy and happiness to Gokul dham. Krishna’s childhood exploits are part of Hindu folklore. How he stole maakhan or butter from the pots despite them being kept at a high level, how he stole the gopis’s clothes and hid them as they bathed in the river, how Yashoda defended every prank of his…these stories are known to all…especially through bhajans like “Maiya mori, mein nahi maakhan khayo”… Once, Yashoda was chasing baby Krishna because of his naughty ways. She asked him to open his tiny mouth to see whether he had eaten his favourite makhan or not, when Vishnu revealed the entire Cosmos to Yashoda inside his mouth. She was stunned, but by a divine act, was made to forget what she saw as well as the enormity of the incident.

The Cowherd With Divine Flute

In the holy scripture, the Bhagwata Purana, there is a whole chapter about Krishna playing his transcendental bansuri in Vrindavan. Krishna himself is supposed to have explained: “If anyone wants to taste the nectarine sweetness of my lips, he should empty himself of his egoism like the bansuri empties itself quickly, so that I may fill it with my music and keep it always near my lips.”

Krishna And The Gopis

As Krishna grew into a young lad, he was the one whom all the gopis or girls of Vrindavan wanted. They had eyes only for him, such was his charisma.