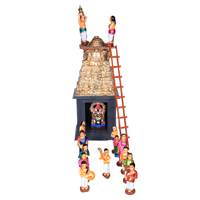 Kumbhabhishekam, also known as Samprokshanam is a Hindu temple ritual that is believed to homogenize, synergize and unite the mystic powers of the deity. It is part of the consecration ceremony of Hindu temples.[1] Kumbha means the Head and denotes the Shikhara or Crown of the Temple (usually in the gopuram) and abhisheka or Prokshanam is ritual bathing. Kumbhabhishekam is widely celebrated as a festival in South India.

On the appointed day and at an auspicious time, the Kumbha is bathed with the charged and sanctified holy waters in the sacrificial pot and, by a mystic process, these pranic powers trickle down a silver wire and enter the deity installed inside the sanctum sanctorum of the temple.