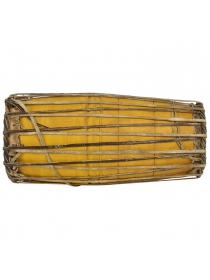 Miruthangam is a classical double headed percussion instrument of Tamil origin. Along with its ancestor the Mathalam, Miruthangam is one of the most ancient of rhythmic instruments. It is commonly referred to as the “King of percussion” instruments. Miruthangam is used primarily as a rhythmic accompaniment in a Carnatic music ensemble including vocal, instrumental and Bharathanatyam dance performances. The body has quite a big opening at one end and at the other end a smaller one. On these two openings the skins are fitted. Their tension is held by a rawhide strap, which is pulled to and fro over the whole length of the body between the two skins. The skins of miruthangam are made out of goat,cow & buffalo skin and are layered. The black spot (atham or karanai) on the smaller skin is made of rice starch as a binding agent and ferric oxide as substance and is confined to a smaller area and is thicker than on North Indian drums. The outer skin ring, which overlaps the end-to-end main skin, covers a larger area so that between this ring and the black spot only a very small ring is exposed. The overlapping outer skin ring is partly responsible for the typical rattling sound. The bigger skin has no black spot. Tuning blocks under the strap are also traditionally not used for miruthangam.