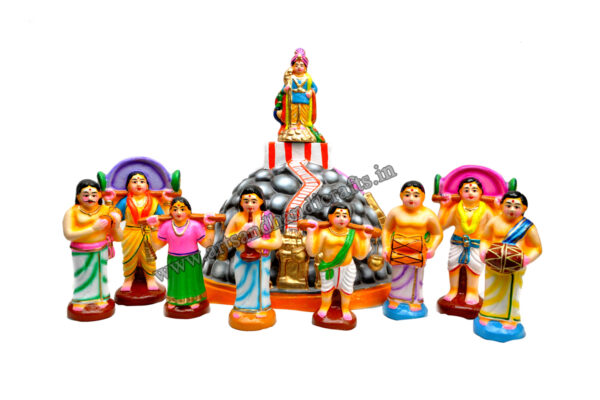 References to the place exist in ancient Tamil devotional texts. According to Hindu mythology, “Sage Narada once visited the celestial court of Lord Shiva at Mount Kailash to present to Him a fruit, the gyana-pazham (literally, the fruit of knowledge), that held in it the elixir of wisdom. Upon Lord Shiva expressing his intention of dividing the fruit between his two sons, Ganesha and Karthikeya, the sage counselled against cutting it. He decided to award it to whomever of his two sons first circled the world thrice. Accepting the challenge, Lord Karthikeya started his journey around the globe on his mount peacock. However, Ganesha, who surmised that the world was no more than his parents Shiva and Shakticombined, circumnambulated them”.[2] Pleased with their son’s discernment, Lord Shiva awarded the fruit to Lord Ganesha. When Kartikeya returned, he was furious to learn that his efforts had been in vain. He left Kailash and took up his abode in Palani hills in South India. It is believed that Karthikeya felt the need to get matured from boyhood and hence chose to remain as a hermit and discarded all his robes and ornaments. He went into meditation to know about himself.[citation needed]