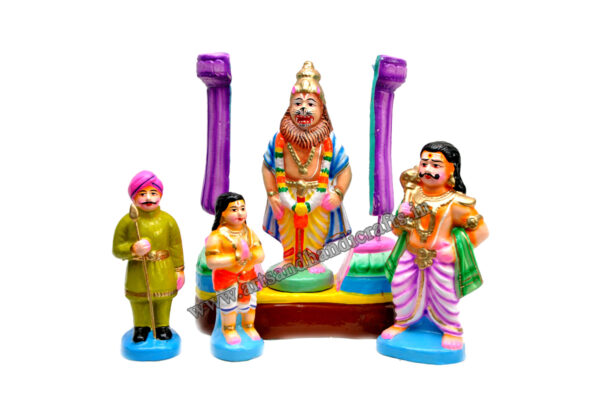 Prahlāda was born to Kayadu and Hiranyakashipu, an evil daitya king who had been granted a boon that he could not be killed of anything born from a living womb, neither be killed by a man nor an animal, neither during the day nor at night, neither indoors nor outdoors, neither on land, nor in the air nor in water and of no man made weapon! However, after repeated attempts of filicide by Hiranyakashipu unto Prahalāda, Prahalāda was finally saved by Lord Narasimha, a prominent avatar of Vishnu who descended to demonstrate the quality of Divine rage and redemption by killing the demon king. The word “Narsimha” is derived from the Sanskrit word” nar” meaning Man and “simaha” meaning lion.[2] Thus Narsimha to a being who is half man and half lion. Lord Narasiṁha, being the transcendental Supreme Personality of Godhead, fulfilled all the proper requirements by which the otherwise nearly-invincible Hiranyakashipu could be killed.[citation needed]

After the death of his father, Prahlāda took his father’s kingdom and ruled peacefully and virtuously. He was known for his generosity and kindness. He sowed similar seeds in his son Virochana and grandson Mahabali.[citation needed]

Prahlāda–while being in his mother’s womb–got to hear Narada‘s chants. He was taught by Narada in early childhood. As a result, he was devoted towards Vishnu. His father didn’t like his Spiritual inclination and tried to warn Prahlāda. Despite several warnings from his father Hiranyakashipu, Prahlāda continued to worship Vishnu instead. His father then decided to commit filicide and poison Prahlāda, but he survived. He then trampled the boy with elephants, but the boy still lived. Then he put Prahlāda in a room with venomous snakes, and they made a bed for him with their bodies.[citation needed]

Holika, the sister of Hiranyakashipu, was blessed in that she could not be hurt by fire. Hiranyakashipu put Prahlāda on the lap of Holika as she sits on a pyre. Prahlāda prayed to Vishnu to keep him safe. Holika then burned to death as Prahlāda is left unscathed. This event is celebrated as the Hindu festival of Holi.[3]

After tolerating abuse from Hiranyakashipu, Prahlāda is eventually saved by Narasiṁha, Lord Vishnu in the form of a man-lion chimera, who places the king on his thighs, and kills him with his sharp nails at the entrance to his home at dusk, thus nullifying all of Hiranyakashipu’s boon of virtual immortality.[4]

There is an underground pillar known as “Prahlāda khamba” in Dharahra village, in the Purnia District of Bihar, India. It is said to be the pillar from which Narasiṁha manifested to kill Hiranyakashipu. Adjacent to the pillar is a large temple devoted to Lord Narasiṁha. Allegedly, attempts to excavate or move the “Prahlāda khamba” have failed. In Maharashtra, an underground temple near the banks of the river Krishna in Sangli District hosts a beautiful stone carved sculpture of “Narasimha and Laxmi“.[citation needed]