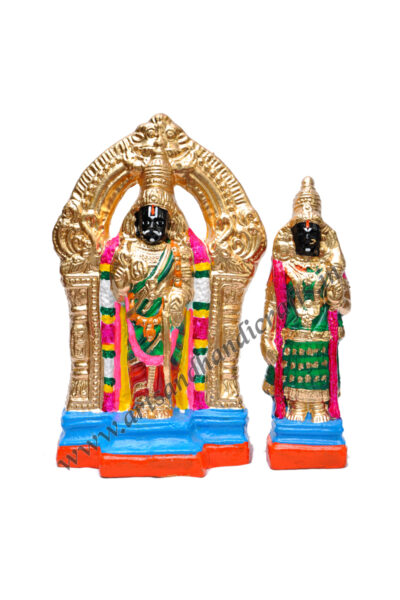 The temple was originally built by the Pallavas in the 8th century, subsequently expanded by Cholas and later by the Vijayanagara kings in the 15th century.[3][12] The temple has several inscriptions dating from the 8th century in Tamil and Telugu[3] presumably from the period of Dantivarman, who was a Vishnu devotee.[13] Thirumangai Alvar, the 9th century alvar also attributes the building of temple to the Pallava king.[13] From the internal references of the temple, it appears that the temple was restored during 1564 CE when new shrines were built.[14] In later years, endowments of villages and gardens have enriched the temple.[14] The temple also has inscriptions about the Pallava king, Nandivarman of the 8th Century.[15]

The temple was extensively built during the Chola period and a lot of inscriptions dating back to the same period are found here. The outer most mandapam is replete with sculptures of various forms of Vishnu, especially the avatars. One can also see inscriptions of Dantivarma Pallava of the 8th century, Chola and Vijayanagara in the temple. The first architectural expansion of the temple took place during the reign of the Pallavas (Tondaiyar Kon) as vividly described by Tirumangai Azhwar. Reminiscent of this is the inscription of the Pallava King Dantivarman (796-847 A.D.), which is preserved in the temple. The temple witnessed a major expansion during the rule of the Vijayanagar kings like Sadasiva Raya, Sriranga Raya and Venkatapati Raya II (16th century). Many subshrines and pillared pavilions (mandapas) like the Tiruvaimozhi Mandapa were added.

A Pallava king built the present temple in the eighth century. The gopuram was also built by a Pallava king – Tondaiman Chakravarthy. There are inscriptions that record the contributions of the Chola kings Raja Raja and Kulottunga III, Pandya King Maravarman and many rulers of the Vijayanagar dynasty including Ramaraja Venkatapathiraja and Vira Venkatapathy. For a while the East India Company administered the temple. The pushkarani is called Kairavani and five sacred teerthams are believed to surround the tank – Indra, Soma, Agni, Meena and Vishnu. Seven rishis – Bhrigu, Atri, Marichi, Markandeya, Sumati, Saptaroma and Jabali – performed penance here. All five deities in the temple have been extolled by Tirumangai Azhvar.[16][17] There is also a separate shrine for Andal, one of the 12 Alvars who is also considered as a consort to the presiding deity.

It is one of the very few shrines in the country dedicated to Krishna as Parthasarathy, charioteer of Arjuna and to contains idols of three avatars of Vishnu: Narasimha, Rama, and Krishna.[5] Because of the association of the temple with Krishna, Tiruvallikeni came to be regarded as the Southern Vrindavana.[15][18][19] He also mentioned about the Telliya Singar shrine within the temple.[13]