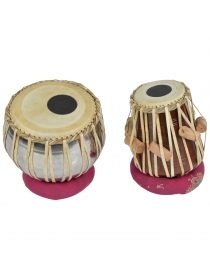 The Tabla is regarded as the queen of drums and percussion instruments and is the most popular Indian rhythm instrument. It consists of two drums, the Bayan (big bass drum) and the Dayan.The two of them are almost always played together. Both the two drums as a pair and also the Dayan on its own – as opposed to the Bayan – are called Tabla. Both drums have a body that is closed at the bottom. The open top is mostly covered with a goat leather skin. To the edge of this basic skin, a second skin (Kani) is attached. In the centre of the skin is the so-called GAB: a black area which gives the instrument a special sound and makes the variety of sounds and modulations possible. It is a fine art to apply this GAB in the correct mixture, consistency and strength of a paste which consists mainly of rice flour and iron filings. When playing, the two drums are placed on rings (Bira) which support them. The tuning wedges that are held by leather straps at the sides are meant for tuning the instrument. Depending on whether the wedges are beaten upwards or downwards by the tuning hammer, the sound gets lower or higher. A fine tuning is done by beating with the tuning hammer on the woven ring around the skin. The playing technique requires a differentiated fingering in connection with the complex composition of the skin membranes. The combination of the two drums produces an incredible fullness and details of different rhythm structures and this fullness of expression is unmatched by any other rhythm instrument. The skins of the Tabla are likely to wear out and have to be changed from time to time, depending on how often the instrument is played and what kind of conditions it is exposed to. Even when the instrument is very old, it can, when the substance i.e. the wooden body is o.k., be restored to a wonderful instrument by a new skin. This task should generally be done by an expert.