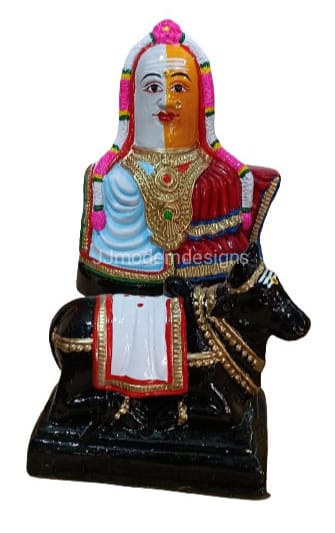 Ardhanari” redirects here. For the 2012 film, see Ardhanaari. For the Ardhanari androgynous form of the God Vishnu, see Vaikuntha Kamalaja.

The Ardhanarishvara (Sanskrit: अर्धनारीश्वर, romanized: Ardhanārīśvara, lit. ‘the half-female Lord’), is a form of the Hindu deity Shiva combined with his consort Parvati. Ardhanarishvara is depicted as half-male and half-female, equally split down the middle. The right half is usually the male Shiva, illustrating his traditional attributes.

Ardhanarishvara represents the synthesis of masculine and feminine energies of the universe (Purusha and Prakriti) and illustrates how Shakti, the female principle of God, is inseparable from (or the same as, according to some interpretations) Shiva, the male principle of God, and vice versa. The union of these principles is exalted as the root and womb of all creation. Another view is that Ardhanarishvara is a symbol of Shiva’s all-pervasive nature.

The name Ardhanarishvara means “the Lord Who is half woman.” Ardhanarishvara is also known by other names like Ardhanaranari (“the half man-woman”), Ardhanarisha (“the Lord who is half woman”), Ardhanarinateshvara (“the Lord of Dance (Who is half-woman),[1][2] Parangada,[3] Naranari (“man-woman”), Ammiappan (a Tamil Name meaning “Mother-Father”),[4] and Ardhayuvatishvara (in Assam, “the Lord whose half is a young woman or girl”).[5] The Gupta-era writer Pushpadanta in his Mahimnastava refers to this form as dehardhaghatana (“Thou and She art each the half of one body”). Utpala, commenting on the Brihat Samhita, calls this form Ardha-Gaurishvara (“the Lord whose half is the fair one”; the fair one – Gauri – is an attribute of Parvati).[6] The Vishnudharmottara Purana simply calls this form Gaurishvara (“The Lord/husband of Gauri).[7]

An early Kushan head of Ardhanarishvara, discovered at Rajghat, now in the Mathura Museum

The conception of Ardhanarishvara may have been inspired by Vedic literature’s composite figure of Yama–Yami,[8][9] the Vedic descriptions of the primordial Creator Vishvarupa or Prajapati and the fire-god Agni as “bull who is also a cow,”[10][11] the Brihadaranyaka Upanishad‘s Atman (“Self”) in the form of the androgynous cosmic man Purusha[8][11] and the androgynous myths of the Greek Hermaphroditus and Phrygian Agdistis.[10][12] The Brihadaranyaka Upanishad says that Purusha splits himself into two parts, male and female, and the two halves copulate, producing all life – a theme concurrent in Ardhanarishvara’s tales.[13] The Shvetashvatara Upanishad sows the seed of the Puranic Ardhanarishvara. It declares Rudra – the antecedent of the Puranic Shiva – the maker of all and the root of Purusha (the male principle) and Prakriti (the female principle), adhering to Samkhya philosophy. It hints at his androgynous nature, describing him both as male and female.[14]

The concept of Ardhanarishvara originated in Kushan and Greek cultures simultaneously; the iconography evolved in the Kushan era (30–375 CE), but was perfected in the Gupta era (320-600 CE).[15][16] A mid-first century Kushan era stela in the Mathura Museum has a half-male, half-female image, along with three other figures identified with Vishnu, Gaja Lakshmi and Kubera.[9][17] The male half is ithyphallic or with an urdhvalinga and makes an abhaya mudra gesture; the female left half holds a mirror and has a rounded breast. This is the earliest representation of Ardhanarishvara, universally recognized.[9][18] An early Kushan Ardhanarishvara head discovered at Rajghat is displayed at the Mathura Museum. The right male half has matted hair with a skull and crescent moon; the left female half has well-combed hair decorated with flowers and wears a patra-kundala (earring). The face has a common third eye. A terracotta seal discovered in Vaishali has half-man, half-woman features.[9] Early Kushan images show Ardhanarishvara in a simple two-armed form, but later texts and sculptures depict a more complex iconography.[11]

Ardhanarishvara is referred to by the Greek author Stobaeus (c. 500 AD) while quoting Bardasanes (c. 154–222 AD), who learnt from an Indian embassy’s visit to Syria during the reign of Elagabalus (Antoninus of Emesa) (218–22 AD).[8][15] A terracotta androgynous bust, excavated at Taxila and dated to the Saka–Parthian era, pictures a bearded man with female breasts.[15][16]

Ardhanarishvara is interpreted as an attempt to syncretise the two principal Hindu sects, Shaivism and Shaktism, dedicated to Shiva and the Great Goddess. A similar syncretic image is Harihara, a composite form of Shiva and Vishnu, the Supreme deity of the Vaishnava sect

The iconographic 16th century work Shilparatna, the Matsya Purana and Agamic texts like Amshumadbhedagama, Kamikagama, Supredagama and Karanagama – most of them of South Indian origin – describe the iconography of Ardhanarishvara.[22][23][24][25][26] The right superior side of the body usually is the male Shiva and the left is the female Parvati; in rare depictions belonging to the Shaktism school, the feminine holds the dominant right side.[27] The icon usually is prescribed to have four, three or two arms, but rarely is depicted with eight arms. In the case of three arms, the Parvati side has only one arm, suggesting a lesser role in the icon.

The male half wears a jata-mukuta (a headdress formed of piled, matted hair) on his head, adorned with a crescent moon. Sometimes the jata-mukuta is adorned with serpents and the river goddess Ganga flowing through the hair. The right ear wears a nakra-kundala, sarpa-kundala (“serpent-earring”) or ordinary kundala (“earring”). Sometimes, the male eye is depicted smaller than the female one and a half-moustache is also seen.[28][29] A half third eye (trinetra) is prescribed on the male side of the forehead in the canons; a full eye may also be depicted in middle of forehead separated by both the sides or a half eye may be shown above or below Parvati’s round dot.[28][30] A common elliptical halo (prabhamandala/prabhavali) may be depicted behind the head; sometimes the shape of the halo may differ on either side.[30]

In the four-armed form, a right hand holds a parashu (axe) and another makes an abhaya mudra (gesture of reassurance), or one of the right arms is slightly bent and rests on the head of Shiva’s bull mount, Nandi, while the other is held in the abhaya mudra gesture. Another configuration suggests that a right hand holds a trishula (trident) and another makes a varada mudra (gesture of blessing). Another scripture prescribes that a trishula and akshamala (rosary) are held in the two right hands. In the two-armed form, the right hand holds a kapala (skull cup) or gestures in a varada mudra.[28][29] He may also hold a skull.[23] In the Badami relief, the four-armed Ardhanarishvara plays a veena (lute), using a left and a right arm, while other male arm holds a parashu and the female one a lotus.[31]

The Shiva half has a flat masculine chest, a straight vertical chest, broader shoulder, wider waist and muscular thigh.[29] He wears a yagnopavita (sacred thread) across the chest, which is sometimes represented as a naga-yagnopavita (a snake worn as a yagnopavita) or a string of pearls or gems. The yajnopavita may also divide the torso into its male and female halves. He wears ornaments characteristic of Shiva’s iconography, including serpent ornaments.[23][28][30][32]

In some North Indian images,[30] the male half may be nude and also be ithyphallic (urdhavlinga or urdhavreta: with an erect phallus), however, connotes the very opposite in this context.[33] It contextualize “seminal retention” or practice of celibacy[34] (illustration of Urdhva Retas),[35][36][37] and represents the deity as “the one who stands for complete control of the senses, and for the supreme carnal renunciation”,[33] other images found in North India include full or half phallus and one testicle.[18] However, such imagery is never found in South Indian images;[30] the loins are usually covered in a garment (sometimes a dhoti) of silk or cotton, or the skin of a tiger or deer), typically down to the knee, and held in place by a sarpa-mekhala, serpent girdle or jewellery. The right leg may be somewhat bent or straight and often rests on a lotus pedestal (padma-pitha). The whole right half is described as smeared with ashes and as terrible and red-coloured or gold or coral in appearance; however, these features are rarely depicted.[28][30]

The female half has karanda-mukuta (a basket-shaped crown) on her head or well-combed knotted hair or both. The left ear wears a valika-kundala (a type of earring). A tilaka or bindu (a round red dot) adorns her forehead, matching Shiva’s third eye. The left eye is painted with black eyeliner.[38] While the male neck is sometimes adorned with a jewelled hooded serpent, the female neck has a blue lotus matching it.[5]

In the four-armed form, one of the left arms rests on Nandi’s head, while the other is bent in kataka mudra pose and holds a nilotpala (blue lotus) or hangs loosely at her side. In the three-armed representation, the left hand holds a flower, a mirror or a parrot. In the case of two-armed icons, the left hand rests on Nandi’s head, hangs loose or holds either a flower, a mirror or a parrot. The parrot may be also perched on Parvati’s wrist. Her hand(s) is/are adorned with ornaments like a keyura (anklet) or kankana (bangles).[32][38]

Parvati has a well-developed, round bosom and a narrow feminine waist embellished with various haras (religious bracelets) and other ornaments, made of diamonds and other gems. She has a fuller thigh and a curvier body and hip than the male part of the icon.[18][38] The torso, hip and pelvis of the female is exaggerated to emphasize the anatomical differences between the halves.[39] Though the male private parts may be depicted, the female genitalia are never depicted and the loins are always draped.[18] She wears a multi-coloured or white silken garment down to her ankle and one or three girdles around her waist. The left half wears an anklet and her foot is painted red with henna. The left leg may be somewhat bent or straight, resting on a lotus pedestal. In contrast to the Shiva half, the Parvati half – smeared with saffron – is described as calm and gentle, fair and parrot-green or dark in colour.[32][38] She may be draped in a sari covering her torso and legs. 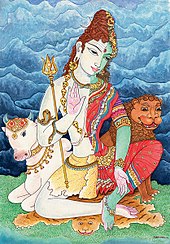 A seated Ardhanarishvara with both the vahanas

The posture of Ardhanarishvara may be tribhanga – bent in three parts: head (leaning to the left), torso (to the right) and right leg or in the sthanamudra position (straight), sometimes standing on a lotus pedestal, whereupon it is called samapada. Seated images of Ardhanarishvara are missing in iconographic treatises, but are still found in sculpture and painting.[30][40] Though the canons often depict the Nandi bull as the common vahana (mount) of Ardhanarishvara, some depictions have Shiva’s bull vahana seated or standing near or behind his foot, while the goddess’s lion vahana is near her foot.