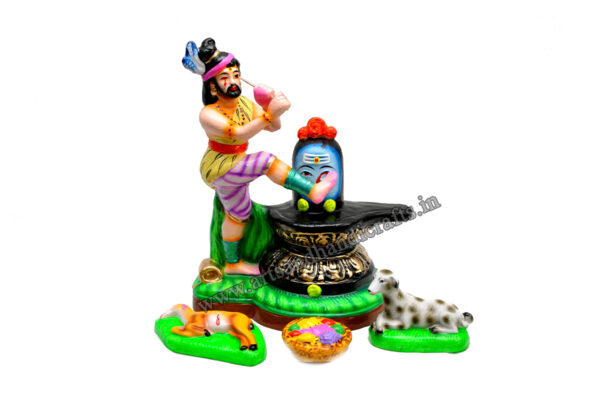 Dinna was a staunch devotee of the Vayu linga of SriKalahasti which he found in the forest while hunting. Being a hunter, he did not know how to properly worship Lord Shiva. It is said that he poured water from his mouth on the Shiva lingam which he brought from the nearby river Swarnamukhi. He also offered Lord Shiva whatever animal he hunted, including swine flesh. But Lord Shiva accepted his offerings since Thinnan was pure at heart and his devotion was true. Once, Lord Shiva tested the unshakable devotion of Tinna. With his divine power, He created a tremor and the roof-tops of the temple began to fall. All the sages ran away from the scene except for Dinna who covered the linga with his body to prevent it from any damage. Hence he was named thereafter as Dheera (valiant one).

Tinna noticed that one of the eyes of the Shiva linga was oozing blood and tears. Sensing that Shiva’s eye had been injured, Dheera proceeded to pluck his one eye out with one of his arrows and placed it in the spot of the bleeding eye of the Shiva linga. This stopped the bleeding in that eye of the linga. But to complicate matters further, he noticed that the other eye of the linga has also started oozing blood. So Tinna thought that if he were to pluck his other eye too, he would become blind to exactly know the spot where he has to place his own second eye over the bleeding second eye of the lingam. So he placed his great toe on the linga to mark the spot of the bleeding second eye and proceeded to pluck out his other and only eye. Moved by his extreme devotion, Shiva appeared before Dinna and restored both his eyes. He made Dinna as one of the Nayanmars and he was called as Kannappan or Kannappa Nayanar.

When Arjuna was meditating on Shiva for Pasupathastra, to test him Shiva entered that forest as an animal hunter and due to word war between Shiva and Arjuna, a battle took place between both and finally impressed by Arjuna’s efforts, Shiva gave him the Pasupathasthra. However, because of his boastful nature of being the greatest warrior, he is born again as a devotee in the Kali Yuga as Kannappa Nayanar and finally got liberation.