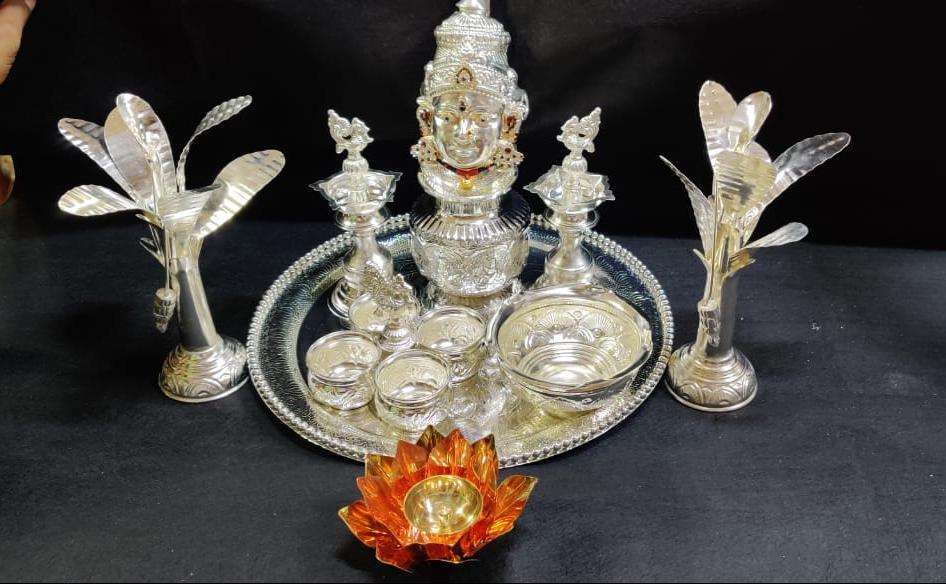 Varalakshmi Vratam/ Vara Mahalakshmi Vrata is a festival to propitiate the Goddess Lakshmi. Varalakshmi is one who grants boons (“Vara”). It is an important pooja performed by many women in the states of Karnataka, Andhra Pradesh, Telangana, Tamil Nadu, and northern Sri Lanka. The Hindu festival going by the name ‘Vara Mahalakshmi Vrata’ is celebrated on the Second Friday or the Friday before the day of the full moon – Poornima – in the month of Shravana, which corresponds to the Gregorian months of July–August.

Varamahalakshmi Vrata is performed by women for their own well-being and that of all their family members. It is believed that worshipping the Goddess Varalakshmi on this day is equivalent to worshipping Ashtalakshmi – the eight goddesses of Wealth, Earth, Wisdom, Love, Fame, Peace, Contentment, and Strength. Due to the rising popularity of this holy day in some states, it is now being declared an optional official holiday in India.

Lord Shiva himself narrated Varalakshmi viratham, making it one of the most potent observances. Those who follow this viratham will be relieved of their sorrows and pains, as well as their financial troubles. Tranquillity and harmony shall prevail at the home[1].

In the Magadha Kingdom of yore, there lived a woman called Charumathi in a town named Kundinyapura. Impressed of her devotion to the goddess, the Goddess Mahalakshmi appeared in her dream and asked her to worship Varalakshmi (Vara = boon, Lakshmi = goddess of wealth) and seek to fulfill her wishes. Varalakshmi is yet another form of Lakshmi, the goddess of wealth. The prayer/worship was prescribed to be offered on the Friday of Shravana month preceding the night of the full moon.

When Charumathi explained her dream to her family, they encouraged her to perform the pooja. Many other women of the village joined her in performing the pooja in a traditional way and offered many sweets to the Goddess Varalakshmi, along with sacred chants.

On this occasion, women worship Goddess Lakshmi with utmost devotion offering fruits, sweets and flowers, usually a kalasam (representing the deity) will be decorated with a saree, flowers and gold jewelry with offerings placed in front.[2]

A rakshai/saradu (sacred thread) is among the offerings and adorned on the wrists of women after the pooja has been completed. This is worn to signify protection and piety, and several articles are given as gifts and charity in good faith.[3] This pooja can be performed with no restriction on caste or creed. To this day, many women observe this traditional festival praying to Varamahalakshmi for her blessings in the form of wealth and well being of their family.[citation needed]

Eight forces or energies are recognized and they are known as Siri (Wealth), Bhu (Earth), Sarasvathi (Wisdom), Preethi (Love), Keerthi (Fame), Shanthi (Peace), Santhushti (contentment), and Pushti (Strength). Each one of these forces is called a ‘Lakshmi’ aka:

J.J MODERN DESIGNS Running successfully for the last 15 years. J.J MODERN DESIGNS is proud to be a company with unique products and concepts. We believe in providing you with the best customer service and a wide variety of products at fair prices. Our team members have a lot of experience in customer service and merchandising. We keep on satisfying our regular customers and we can also accept any new customer as well. No matter what style you select, it will always be a J.J Modern Designs quality product.